Our 2020/21 season was like no other in living memory. Not since the onset of World War Two in 1939 had a football season faced disruption to the point of, in our case, the National League North being declared ‘null and void’ with 31 league games still left for us to play.

Despite the shortened season we put together two excellent cup runs, reaching the second round proper of the FA Cup and the quarter finals of the FA Trophy. Turning over higher league opponents no less than three times on the way and featuring live on the BBC in our FA Cup tie at Bristol Rovers.

We will never know how our league campaign would have panned out with so few games played but with Alun Armstrong at the helm for his third season in charge we carry the same optimism and expectation into next season as we begun this season with.

Looking back to May 2020, just two months into the country’s first lockdown and at a time when uncertainly loomed large, we asked the fans if they would be able to back Alun in his quest to push the club forwards. Given the climate of Covid-19 and economic instability at that time, we cautiously set a 'Boost The Budget' target of £100,000, not knowing what to expect.

Across 31 incredible days, 708 investors raised a staggering £131,385, allowing Alun to attract the likes of Erico Sousa, Nicky Hunt, Tony McMahon, Luke Charman and Dan Maguire to Blackwell Meadows, whilst retaining the likes of Will Hatfield, Joe Wheatley and Adam Campbell. All at a time of huge uncertainty. A massive thank you to everyone who contributed to that amazing total. Every penny counted.

With the start of the 2021/22 season scheduled for August 14th and the promise of a 'normal season' ahead, hopefully with a full Blackwell Meadows too, Alun has already begun work on what his squad will look like for a planned successful season with the aim to be competing at the top end of the table. Another cup run or two wouldn’t be bad either.

This is where you, a DFC fan, can play an integral part in helping us achieve these aims.

Since its initial inception five years ago, Boost The Budget investors have contributed over £360,000 to the club's playing budget in that time. A staggering contribution and the very definition of 'fan ownership'.

The fans, ultimately the Club’s owners, dictating the level of ambition and ability of the squad by setting a significant chunk of the manager’s playing budget. If we can deliver to Alun a competitive budget, then our chances of success both on and off the pitch are significantly increased.

As we launch 'Boost The Budget 2021/21', with our most ambitious target yet (£120,000), we’re asking fans to back Alun in his quest to get the Club to the National League. Subscribing to the scheme early will allow Alun to tie down the contracts of current key squad members and begin to plan for the new arrivals that he feels will make a big difference.

The 2021/22 scheme is now officially open and will run until Monday 31st May.

You can choose which day of the month payments will taken from your account with a minimum of 5 days from the current date for the first payment to be taken and you will be billed on a recurring basis each week or month depending which option you choose. The last payments will be taken in April/May 2022 so when you pledge in May 2021 you will have 12 recurring monthly payments & 54 payments if you choose to pay weekly. You can also make a single one-off pledge via the platform if you prefer.

Last season we delivered a series of popular “money can’t buy” rewards alongside pledges, unfortunately many were unable to be redeemed due to the pandemic but we have rolled these over for you to take at a later date. 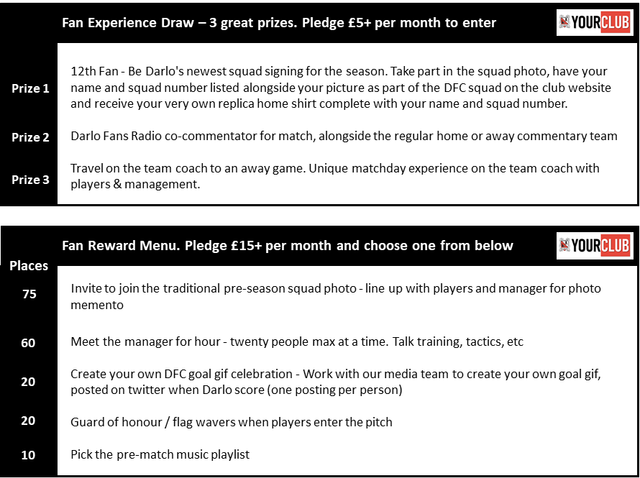